A cumulative attack on ‘critical race theory’ has recently emerged from within government offices in the Global North, including the Nordic countries. Some have resulted in state legislatures banning educators from teaching this area of study, namely in the United States. In Western Europe and Scandinavia, similar sentiments have emerged in parliament. Curiously, legal analysis and research at the intersection of the law, race, capital, and the state in the social sciences in the Nordics is relatively scarce, and despite clear indications of racially motivated violence, discrimination, and intolerance in the region, domestic legal regimes, the judiciary, and the parliament, are frequently unable to recognize it as such.

In recent years, there has also been an upsurge in the popular and scholarly debates about anti-Blackness and histories of transatlantic slavery, as well as Indigenous sovereignty, Native dispossession, the forced migration of transnational adoption, and settler colonialism in the Nordics. In popular and scholarly discourse furthermore, discussions of the terms ‘(im)migrants’ and ‘Muslims’, are frequently undergirded by ideas of race and racialization, and yet studies of religious ‘radicalization’, anti-immigration and islamophobia are often treated as distinct from racism. Notably, these themes are conjoined due to the imperial and colonial histories of the region. The debates provocatively, or refreshingly presume that white supremacist sentiment and racial logics structure the institutional histories of Nordic countries today. Responding to and entangled in colonial and imperial forms of domination, the debates galvanize a set of questions shaped around settler colonialism, racial capitalism, and (im)migration regimes in the region. Like some ‘critical race theory’, they link a timely focus on the law, race, capital, and the state.

While the central symbol of the racialized 'other' in Europe today is the ‘immigrant’ and Muslim 'other', racialization in Europe – of Indigenous, Black, non-white and ethnic ‘minority’ subjects – has its origin in colonialism and racial capitalism. Scholars in this round table discussion will think through the terms of racial capitalism and settler colonialism in relation to their own work and in the context of the Nordics exploring the racial logics of transnational and transhistorical disciplinary regimes. What are the possibilities and limitations of thinking through these terms in an attempt to understand the long durée of Native dispossession, transatlantic slavery and neo-colonial/imperialist global inequalities in the Nordic region today? 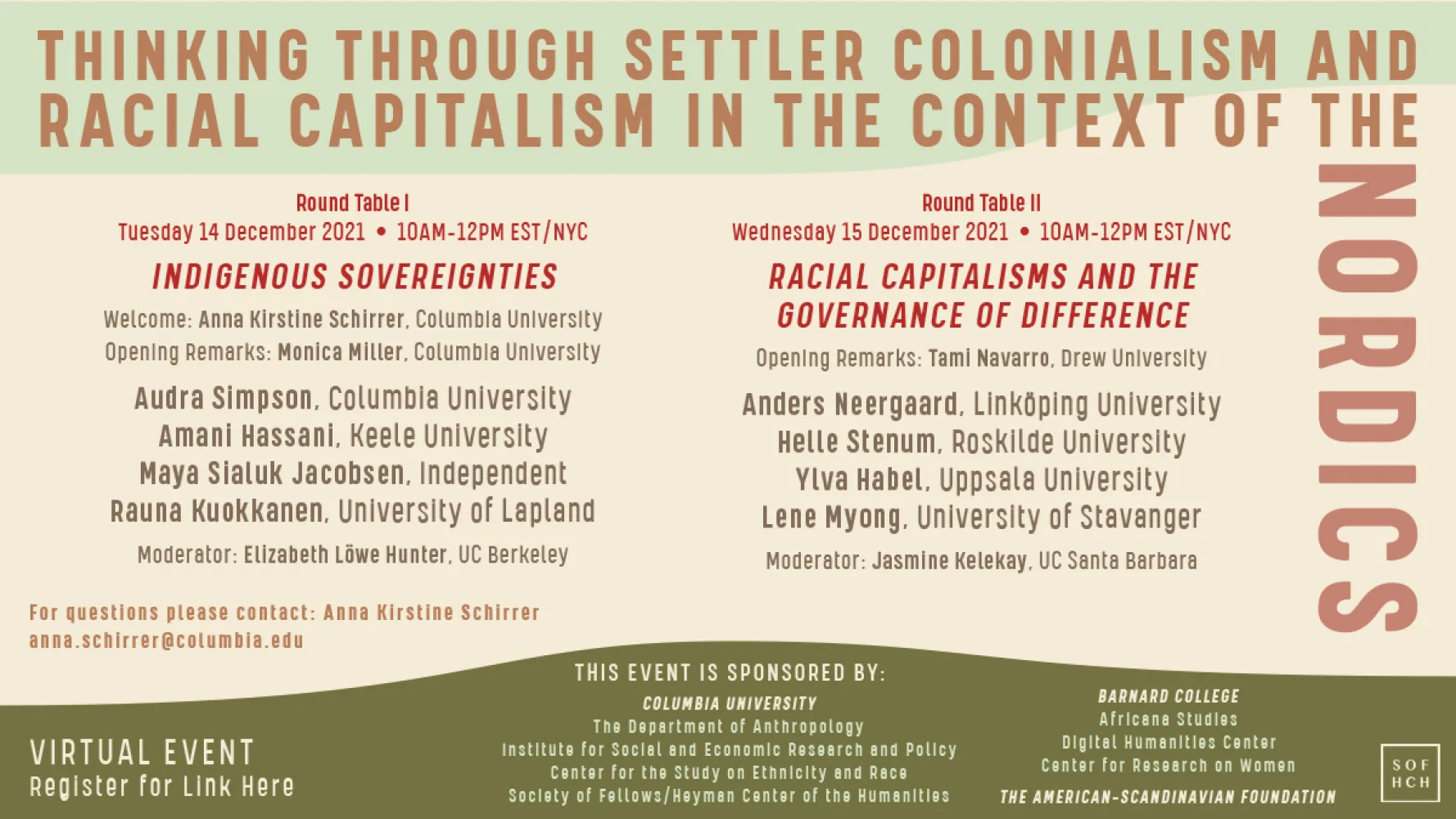 Racial Capitalisms and the Governance of Difference

Columbia University: The Department of Anthropology | Institute for Social and Economic Research and Policy | Center for the Study on Ethnicity and Race | Society of Fellows/ Heyman Center of the Humanities