The Francophone-Caribbean scholar and lead researcher of a $5 million Mellon Foundation grant and a $40,000 NEH award discusses her inspirations.

Kaiama L. Glover, the Ann Whitney Olin Professor of French and Africana Studies and faculty director of the Digital Humanities Center, has been awarded two major grants while on academic sabbatical.

“This generous grant will enable us to spark conversations around wide-reaching questions — such as climate change, immigration, the preservation of diverse histories and cultures, and racial and ethnic tensions — and their unique manifestations when considered through the lens of Caribbean scholarship,” said Professor Glover.

In January, the National Endowment for the Humanities (NEH) confirmed a $40,000 fellowship award for Glover’s intellectual biography For the Love of Revolution: René Depestre and the Poetics of the Cold War. Not only was she one of very few scholars who received funding this year — only 8% of applicants were — but hers was the first NEH fellowship given to a Barnard faculty member since 2012. Since joining the College in 2002, Glover has taught students about francophone literature, especially that of Haiti and the French Antilles, and about colonialism, postcolonialism, and the beauty of sub-Saharan francophone African cinema.

“The element of my research that I hope is most significant beyond the context of the academy is its efforts to propose alternative narratives of Caribbean communities — to show Haiti in particular as a space of literary and cultural contribution with global impact, to highlight Black feminisms that emerge from a place other than the U.S., to establish the significance of so-called small places to forming contemporary understandings of ethical modernities,” Professor Glover explained. “I’d say my work as a translator of Francophone literature — a practice that was born directly out of my literary studies and writing — has also had an important impact beyond my field.”

Well before Professor Glover became the recipient of highly competitive and prestigious awards to help expand the perspectives of Caribbean narratives, she was a Harvard University undergraduate studying African American culture and French history and literature. When her advisor, Henry Louis Gates, Jr., suggested she combine the two contexts for her thesis by exploring archival press reviews of Josephine Baker’s Parisian performances in the 1920s, Professor Glover discovered new ways to think about the Black-French experience. She went to Paris on a one-year Fulbright Fellowship after graduating, and then on to a doctoral program in French and Romance Philology at Columbia. It was at Columbia, under the directorship of Guadeloupean novelist and scholar Maryse Condé, that she was able to further develop what eventually became a specialization in francophone literature of the Caribbean.

In the process of examining the reviews of Baker in Paris along with the writings of the Surrealist poet-philosopher André Breton on the Caribbean, Glover learned that a national protest — fueled explicitly, and incredibly, by poetry — occurred in Haiti, leading ultimately to the overthrow of the nation’s dictatorial president. “I have spent the decades since I first encountered this exceptional historical moment exploring the rich literary traditions and cultural offerings of this incredible country,” said Professor Glover.

Below, Glover discusses what the NEH Fellowship means for her individual research endeavors, and how she has been inspired by her colleagues from Barnard’s Department of Africana Studies over the years. 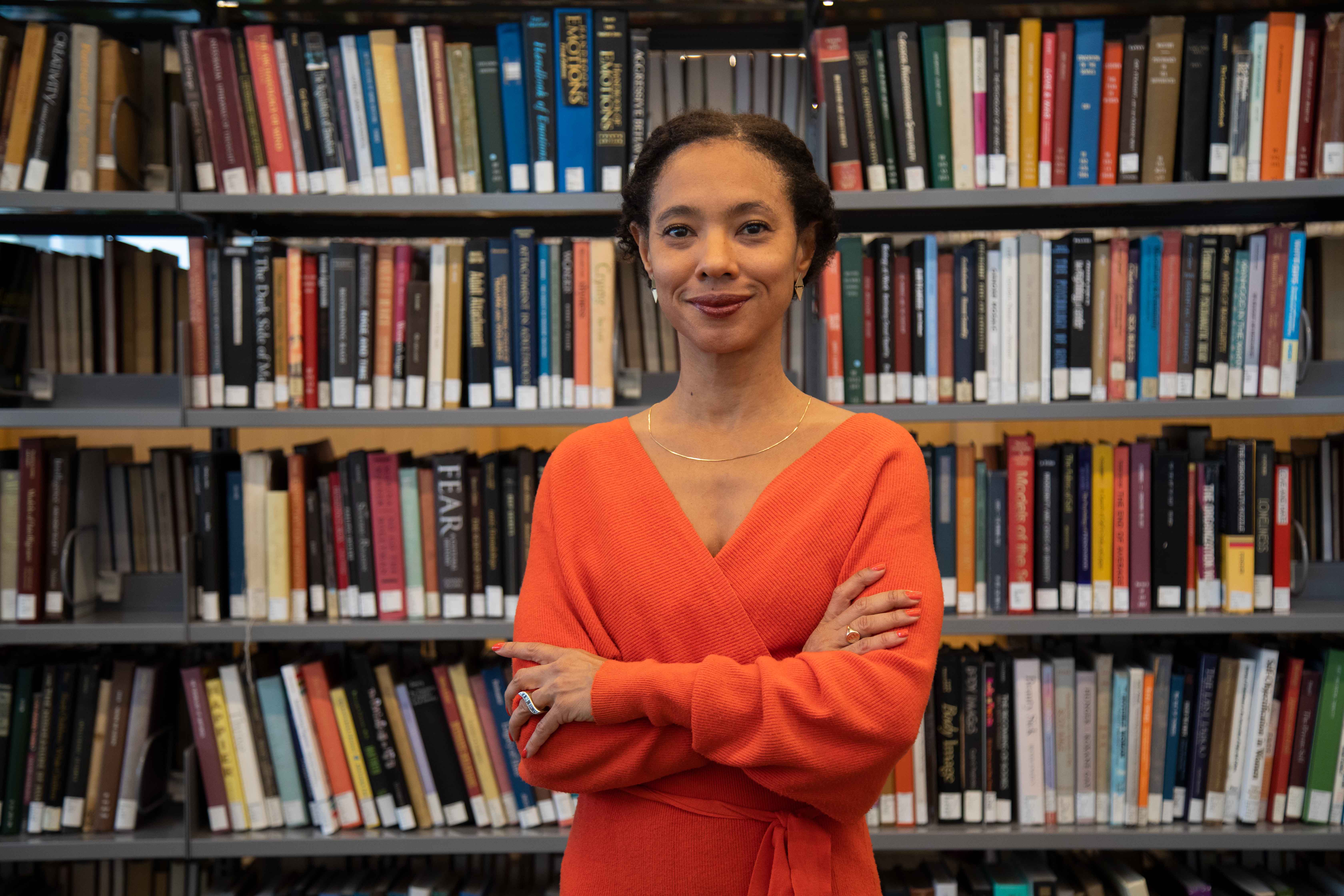 What does receiving this honor mean to you?

To be supported by the NEH is an honor that goes beyond the generous financial support that makes breathing, while writing and working, measurably more comfortable in a material sense. It’s a confirmation that I’m on the right track. It affirms that the story I see in this project is a story worth telling, a story that has a value that others — my peers, my fellow scholars — are also able to see and appreciate.

How will it impact your career?

It cements my commitment to seeing this rather daunting project all the way through, with the confidence that some of the key elements I need to attend to will be supported. Notably, I’ll be able to travel back to the archive in Limoges, France, at some point in the next few months to look for answers to questions that have arisen, been transformed, or become more specific over the course of the years I have spent researching the main character of my book, the fascinating Haitian-French poet, novelist, essayist, and formerly Socialist militant, intellectual René Depestre. I hope that completing this book, which the NEH fellowship helps me to envision, will show I’m capable of a different kind of writing. In past projects, I have been adamantly literary. My “wheelhouse” and great joy has always been playing around in texts, trying to unlock their useful or inspiring secrets by paying close attention to language, to form, to narrative structure, to the configurations of characters, to the crafting of time and space. With this project, I’m transposing that mode of textual inquiry to an actual human being — a writer of texts.

What is your research focus, and how has it evolved throughout your time at Barnard?

My focus has been on the literature and culture of the French-speaking Caribbean, with an underlying interest in matters of canon formation in this context. Inasmuch as the Caribbean is a creolized, Afro-diasporic, geo-cultural space that has necessarily existed in relation to European and U.S. empires, it has had to contend with marginalization and peripheralization. In my work, I have tried to think about the ways that newcenters and margins can persist within the margins of empire themselves. I have been curious to understand how hierarchies are created and maintained in so-called peripheral places, and then from there to immerse myself in texts that fall to the “bottom” of these scales of value or that don’t even “fit” within the metrics such scales propose.

Whereas my early work was focused on Caribbean literature in French and, even more specifically, on Haitian literature, I have since allowed myself to move beyond the nation-language borders of the Americas and to think also about the Anglophone Caribbean literary context. And now, with this latest project, I am looking at a Caribbean author who has produced some of the very texts that have preoccupied me as a literary theorist and whose journeys around the world during the height of the Cold War present a Caribbean prism through which to look at the 20th century.

How has Barnard supported your work over the years?

I have been able to take funded time off at one or more points during the period of researching my books, including a Presidential Research Fellowship for this project just last year, and I have had the opportunity to teach from my work — both in the French Department and in the Africana Studies Department — as it developed. Being on campus, in the classroom, in conversation with incredible Barnard students, has been as useful in working through my research questions as my sabbatical retreats into research and writing.

Who or what inspires your work?

I am inspired in a very fundamental, everyday way by my colleagues in Africana studies at Barnard. I stand in awe and in admiration of how they manage to be at once such presences in their individual fields of study and such generous citizens of the academy. I have been in Africana since the early 2000s, well before it was ever granted the kind of recognition and resources it has today. From its very beginnings, my Africana colleagues have modeled the kind of interdisciplinary, ambitious, and ethics-driven scholarly engagement that I feel fortunate to be a part of.

I am also deeply inspired by the writers — particularly the Caribbean women writers — who create the works I cherish. More so than their talent, it is their fearless vulnerability that inspires and humbles me. It is the risk they take in exposing themselves, their opinions, their contradictions to the scrutiny of often unsympathetic or even downright hostile publics. There is exemplary bravery there that I try to take baby steps toward in my own work.